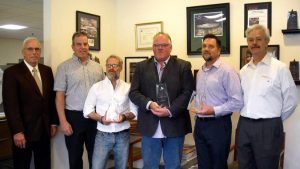 Re:Source New Jersey, a one-stop resource for every flooring finish and related service in the New York metropolitan area, was awarded top honors in commercial flooring’s most respected and influential design competition – the 19th annual Starnet Design Awards.  The Grand Prize, including a $5,000 check donated to the charity of the winner’s choice, was presented to the company for their work on NBC Sports 2016 Summer Olympic Studio in Rio de Janeiro. 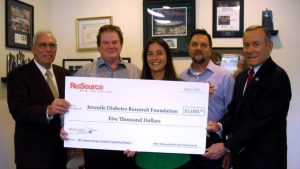 “We are incredibly honored to win the ultimate Grand Prize at the 2017 Starnet Design Awards,” said Peter DeBenedetto, ReSource New Jersey. “This highly visible project was seen throughout the country and globe, and is something our entire team takes enormous pride in. We are also so grateful to Starnet for making this donation to JDRF in our honor, to help them continue their important work.”

“It was inspiring to spend time with the studio designer, contractor and the Re:Source New Jersey team,” said Fred Williamson, Starnet Executive Vice President. “Their work stands out and we’re proud to recognize them with the 2017 Starnet Design Award. They truly represent the best of the best.”

“The Starnet Design Awards allows us to showcase the collaboration between our flooring contractor members, vendor partners, and architect and design communities, said Jeanne Matson, President and CEO of Starnet. “It’s a team effort that can truly produce some amazing results as seen with the Rio NBC Sports 2016 Summer Olympic Studio, and we congratulate all involved in this outstanding project.”

Congratulations to everyone involved in the NBC Sports 2016 Summer Olympic Studio.